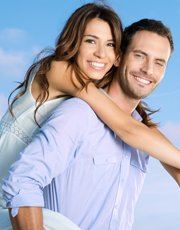 Between the ages of 40 and 50, men will begin to experience a decline in their hormone levels. First described in medical literature in the 1940's, this phenomenon is known as Andropause, often called "Male Menopause." Andropause is a result of low testosterone levels throughout your body. Symptoms of this condition include, a decrease in strength and endurance; a lack of energy and drive; a noticeable decrease in your sex drive; less frequent/strong erections; feeling sad and/or irritable, and feelings of depression just to name a few.

All too often, men have been reluctant to admit that they're experiencing these problems, and most family doctors, as skilled as they are, rarely consider hormone therapy, opting to tell their patients to accept these changes as a natural part of the aging process. But "Knowledge is Power" and now that you know what it is, you can do something about it!

Hormone replacement therapy can be highly effective for males suffering the symptoms of low testosterone. In numerous clinical studies, subjects have reported dramatic improvements in their symptoms; these include:

Within three to six weeks of testosterone therapy, most men report improvements in energy, mood, sexual performance, confidence, self-esteem, and an overall improvement in their sense of well-being. At the Hormone Therapy Network, our doctors have provided custom compounded therapies to thousands of men across the country. Contact us today and see what the Hormone Therapy Network can do for you. It's time to get back in the game!

All of your information is 100% confidential. Just fill out the form or give us a call!